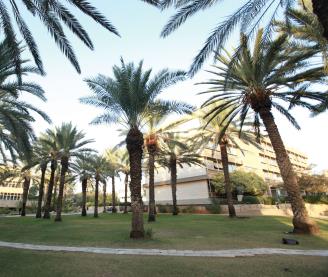 More than 300,000 Students are currently pursuing academic degrees in Israel. This is an amazing figure, implying that almost 50% of the relevant age cohort in Israel attend Higher Education.

The total government budget for Higher Education is about 9B NIS, to be added to tuition and other sources of funding.

The foundations of the higher education system in Israel were laid in the 1920's when the Technion and the Hebrew University of Jerusalem were founded. In 1934 the Weizmann Institute was founded (originally named Daniel Sieff Research Institute), so that at the establishment of the State of Israel these were the three universities in the country. The increase in population, economic as well as social developments led to a demand for higher education and, in response, five new universities were established during the 1950's the 1960's and the 1970's: Bar-Ilan University, Tel-Aviv University, Ben-Gurion University of the Negev and Haifa University.

From the mid 1970's there was an additional stage of development and diversification in the higher education system in Israel. The Open University began to operate in 1974 and in addition, non-university institutions were established. Some already existing institutions were accredited, including the Academy of Music, Bezalel Academy of Arts and Design, Shenkar College of Engineering and Design, the Jerusalem Academy of Music and Dance and others. At the end of the 1970's, teacher training in Israel underwent a process of accreditation, with the transformation of formerly post-secondary teacher training seminaries into institutions of higher education.
During the 1990's the higher education system underwent further expansion, when the 10th amendment to the Council for Higher Education Law enabled the opening of various academic colleges: comprehensive colleges and technological colleges. A further innovation was the introduction of the non-budgetary status: some of the new colleges are not publicly supported or budgeted by the state. In accordance with the decision of the Council for Higher Education, institutions of higher education must be non-profit organizations.
Follow the Council for Higher Education